Visit the News Page for additional resources and COVID-19 updates. 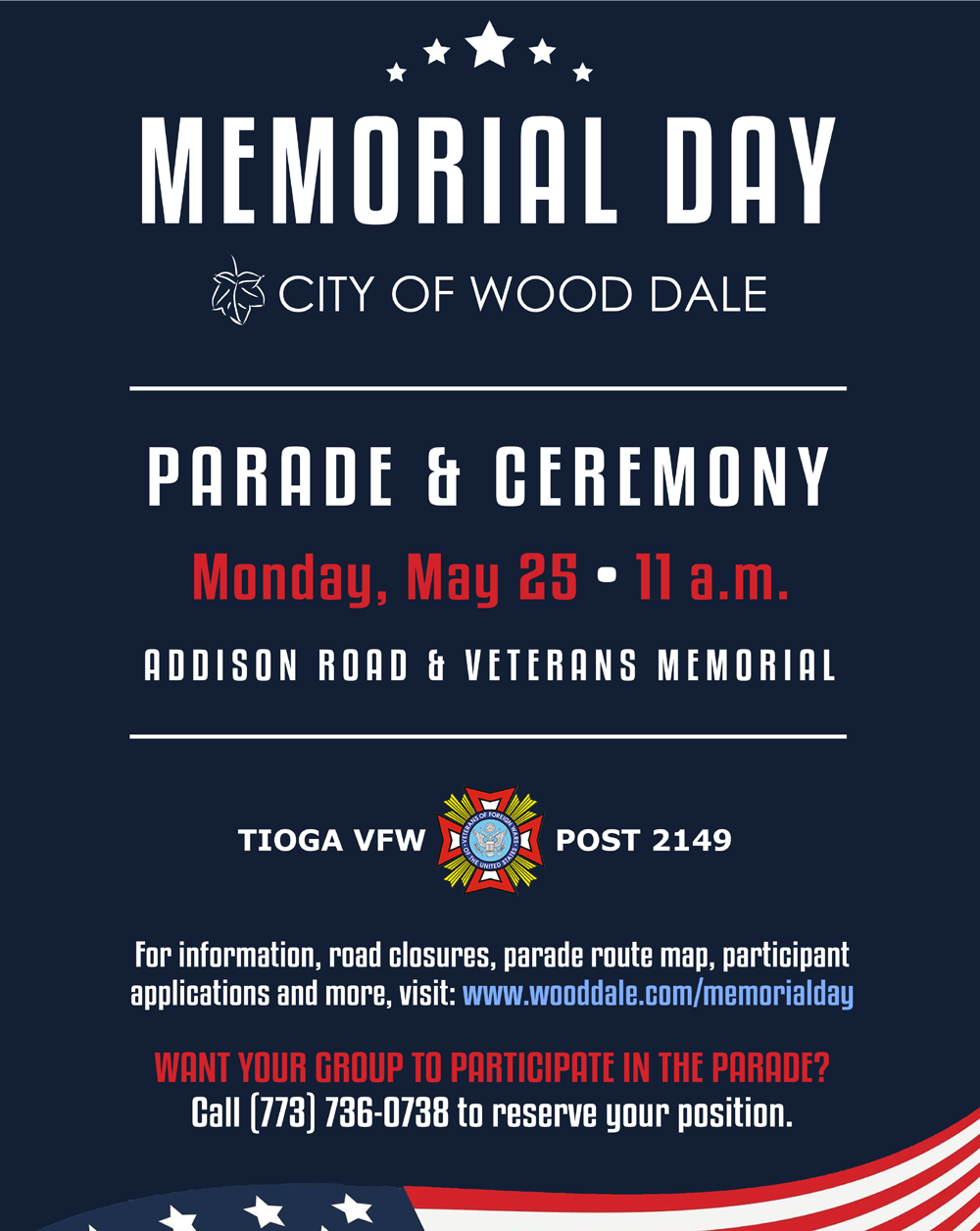 Participate in this year's parade!

Applications may be dropped off at Tioga VFW Post 2149.

The City of Wood Dale and VFW Tioga Post #2149 will be honoring our veterans who gave the ultimate sacrifice for their country with a parade and memorial service on Memorial Day.  The parade will begin at 11:00 am at  Addison Road and Elizabeth Drive and end at Veteran’s Memorial Park, 269 W. Irving Park Road.  At the conclusion of the parade, a short memorial service will be held on the grounds of the Veteran’s Memorial.

Parade Participants
Staging at 10 am on Elizabeth Drive between Addison and Wood Dale Road.

Note: Elizabeth Drive will be closed from 9:30am- Noon

Road Closures
During the road closures, no vehicles will be allowed to cross the roadway except for police or medical emergencies.

The staging area on Elizabeth Drive will allow continued access to the Elizabeth Park Townhomes, Dominion Towers, Dominion Townhouses and Maple Meadows Golf Course. Once Addison Road is closed at 10:45 a.m., vehicles will only be allowed to travel south on Addison Road towards Lake Street.

Memorial Paver Bricks
Memorial Paver Bricks are installed twice each year prior to the Memorial Day and Veterans Day ceremonies. Two brick sizes 4”x8” and 8”x8” are available to honor veterans of any military service, as well as civilian friends, family and organizations. Click here for more information on memorial pavers.

Inclement Weather
In the case of inclement weather the Parade and Ceremony will be cancelled.

Flag Etiquette
As a special tribute to those that have lost our lives we are asking citizens and parade watchers alike to understand flag etiquette. How do you salute it, and when. Military persons in uniform, Boy and Girl Scouts in uniform, and military veterans salute it with a military salute when it is paraded, when the Pledge of Allegiance is said, or when the National Anthem is played. Civilians remove their hat with their right hand and hold it over their left shoulder, or if they are not wearing a hat, they hold their right hand over their heart.

Memorial Day is a federal holiday in the United States for remembering the people who died while serving in the country's armed forces.  The holiday, which is observed every year on the last Monday of May, was formerly known as Decoration Day and originated after the American Civil War to commemorate the Union and Confederate soldiers who died in the war. By the 20th century, Memorial Day had been extended to honor all Americans who died while in the military service.

Many people visit cemeteries and memorials, particularly to honor those who have died in military service. Many volunteers place an American flag on each grave in national cemeteries.